He loves to “do dishes” at the real kitchen sink, and “cook linner” at the toy kitchen. He continues to display a high emotional quotient, both for the emotions of others and for his own. “You okay?” “You need kiss?” “I sawwee (sorry).” And, “I SO mad,” for example. He rides his scooter through the house, then parks it in his room and runs over to the dresser when it’s time for a diaper change. Tonight he rode his scooter to the bathroom for teeth brushing. He’s still quick to smile and laugh, and absolutely loves making others smile and laugh. He’s been mostly talking in a forced deep voice, which makes it difficult to keep a straight face. He executes all the steps by himself of using the potty, which he does every evening before bath. He’s been ready for potty-training for a couple of months… but I’m not. He still sleeps with a pacifier. I tried not long ago to take it. The first night was perfect; second night patchy; third night total bust. So I gave it back, and even bought him new ones for our upcoming trip. I just don’t have any tough mom in me right now. He’s perfectly content in his crib, never yet tried to climb out. When he wakes up
from a nap or in the morning, he quietly sings to himself and plays with the toys he’s forever swapping in and out of his crib. He doesn’t call for me, just waits for me to come in and get him. I’ve even told him once or twice that I’ll be back after a shower, and he’s fine. He mimics Isla often, which usually drives her nuts, and he kinda likes that. He’s gotten fairly picky with eating, which means he’s eating a lot less, as I just continue to serve whatever I’m serving. Yet he’s growing noticeably. He’s got a wicked sweet tooth. He kneels in a chair while eating, flat out refusing the booster he got for his second birthday. Even kneeling, he has impeccable table manners. Seriously. He’s quite structured (my genes) and calm (Elliot’s genes) in his demeanor. He picks up his own toys, throws away trash, sets the table, begs to help with grocery shopping and errands of any sort. He likes to play with most other kids, though he often pulls on the clothing of older boys, or smacks them, when he’s wanting their attention, but they’ve got other things to do. It took me awhile to understand that situation. He knows his colors, and some letters, which he’s picked up on his own. He understands the concept of one versus more than one. So anything more than one is always two, no matter if it’s ten, twenty or a billion. And he’s 2, but he makes parenting look easy. I could go on and on, but I’ll end with this. Yesterday I wore a long skirt, which was a break from the norm for me, clothing-wise. He looked at me with a frown and said, “what you got on, Mommy?” I told him it was a skirt, to which he replied, “you booful, Mommy.” Yep, I’ll keep him. 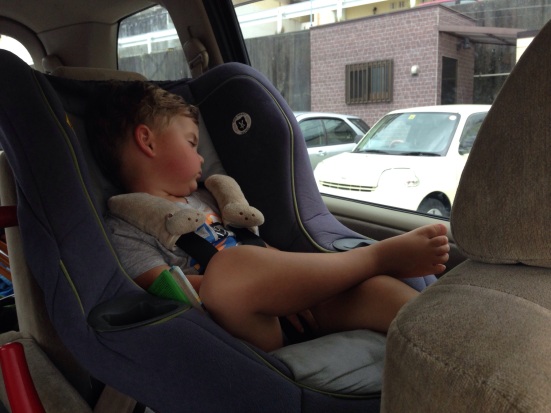 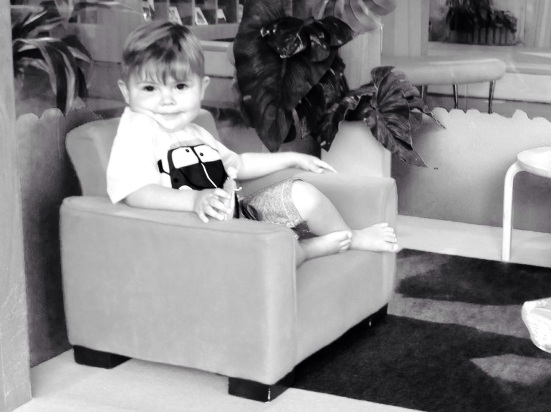