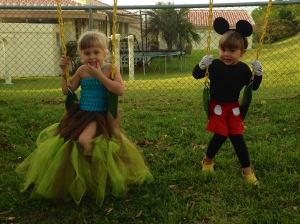 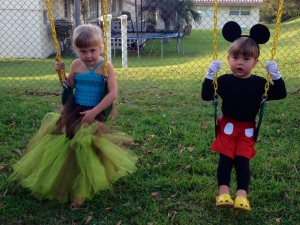 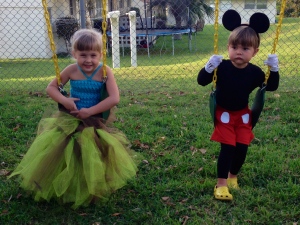 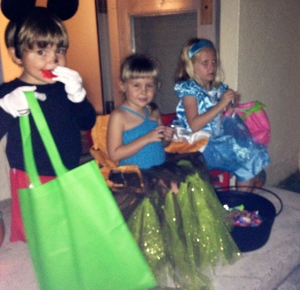 After last year’s fiasco, plus the unsure timing of Elliot’s return from deployment, Isla and Asher got to choose their own costumes this year.

I would have never guessed either child’s choice, and both worked well for a homemade costume. Leading up to Halloween, there were moments of near sabotage of their choices, but I somehow managed to keep them on track and they actually 1) wore their costumes and 2) enjoyed wearing their costumes.

Isla dressed up as Oona, a young mermaid who shows up in a mini-movie with Sophia the First. Never heard of Oona? Join the club! And see the reference picture. I was actually relieved to re-create Oona, and not the other, much more well known mermaid, Ariel (who also shows up in the same mini-movie). I’m just not quite ready for a seashell bra, and I’m super glad Isla’s not either!

Asher dressed up as Mickey Mouse. I have no idea how he came up with this choice, but I certainly didn’t attempt to dissuade him from it. Mickey Mouse was such a simple costume to whip up, and he looked so cute. Who knows what next year will bring, so I’m guessing this was the perfect year for Asher to be a sweet, classic character.